A sight for sore eyes revisited 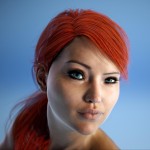 I’ve found several old renders, some of those were never released because they were personal studies, had weird errors in the final render or
did not have the quality I try to uphold. 😉

But some of them still are very nice, so I decided it is time to catch up and try a remake to get them out there.

First off is ‘Dragon lady’, this scene originated in 2010,l I tried a new texture with a dragon tattoo, but for some reasons it keeps crashing the mesh.
so I abandoned it short time later..  I changed her hair and tried and rebuild the mesh, it’s not 100% perfect but good enough to show of her Tattoo.
changed the background and lights and I think it’s nice.

What do you think? Please comments ♥

See the portrait gallery for a full view

A lovable, independent, and most of all, a very happy person, whatever she tells you it comes straight out of her heart. she has become a familiar appearance in several parts of the internet and is loved by many people. She also carries a lot of wisdom, although sometimes struggling with depression, and other issues she always tries to help others in any way she can trying to keep an open mind and being positive towards others. Because she knows what can happen, as part of the wisdom comes from experience, Where she has lots of. "Been there, done that" is a mild way of putting it in a humorous sort of way. Amy is all magical in what she does.. and a little magic goes a long way.. ❤

This site uses Akismet to reduce spam. Learn how your comment data is processed.